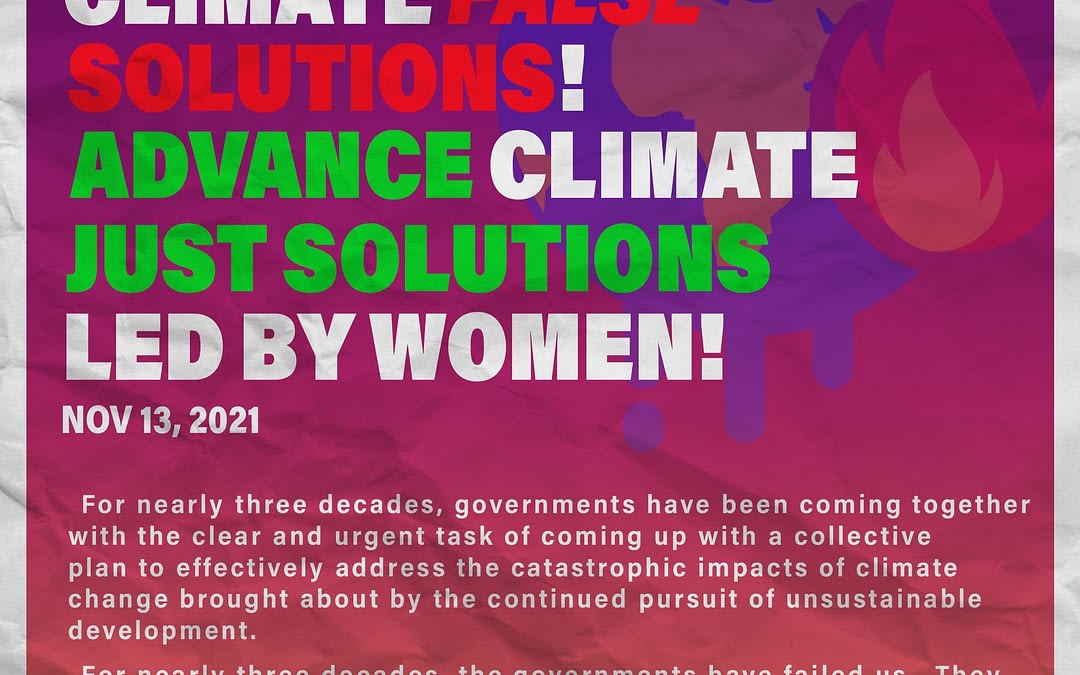 For nearly three decades, governments have been coming together with the clear and urgent task of coming up with a collective plan to effectively address the catastrophic impacts of climate change brought about by the continued pursuit of unsustainable development.

For nearly three decades, the governments have failed us. They have deliberately and brazenly connived with large corporations, and together they continue to develop and promote climate false solutions. Solutions are meant to solve problems, not to create new problems. Climate solutions should result to actual reduction
of GHG emissions. But if these so-called solutions are meant to circumvent obligations by the high-emitting countries and corporations, and do not result to lower emissions, then these are false solutions. If these so-called solutions cause more harm to the communities, cause violations of their rights, further devastate nature, then these are crimes.

In the recent ReSisters Dialogue on Dismantling Climate False Solutions, during the Peoples’ Summit for Climate Justice (7-10 November 2021), we heard stories and actual experiences on the ground from women activists and women human rights defenders, on how projects and investments being peddled as solutions have caused more devastation in the land, environment, and violence against rural and indigenous women, their families and their communities. In India and Thailand, forest conservation projects have become instruments for the governments to take control of the forests, and displace indigenous communities and those who directly depend on these for survival. The forests are being protected for large-scale investments such as mining and plantations; while communities are being driven out of their traditional territories, homes, and sources of livelihood. These indigenous communities have been the stewards and protectors of the forests since time immemorial. Yet, in the name of forest conservation, community leaders, were arrested, some were killed, and others were disappeared.

The concept of green economy is being promoted as a vision that we should aspire for. But this is a deadly deception. In Indonesia, palm oil is being promoted as a source of biofuel, an alternate to biodiesel – a way to transition to green economy. But these huge tracts of oil palm plantations have evicted indigenous communities from their land, and have caused violent land conflicts. Moreover, even as Indonesian President Joko Widodo in his speech in COP 26 talked about electric vehicles, solar power plants, and signed on a commitment to end deforestation by 2030, the permits of giant mines are being processed for renewal. Coal mining in Indonesia has wreaked so much havoc in the lives of indigenous people and local communities. Indigenous leaders who have fought for their lands have been targets of violent attacks. These details were absent in President Jokowi’s statements.

What is also absent in the discussion among the world leaders promoting renewable energy transition – electric
vehicles, solar power – is how resource extensive and violation this is. This means that large-scale extraction minerals such as copper, nickel, Zinc and Manganese will be intensified, and justified in the name of this energy transition. In the Philippines, the region of CARAGA is considered the mining capital of the country, and is the site of large nickel mining operations. The mining corporations have encroached upon critical watersheds and biodiversity areas, while the sea has been heavily contaminated. Rural and indigenous women’s sources of food and livelihood have been compromised, and have been made vulnerable to flooding and landslides. Thus, renewable energy transition should not just be about moving away from fossil fuels. It must also be about lowering the demand of energy, especially from rich developed countries. Otherwise, mining-affected communities will again bear the brunt of this transition, while mining companies enjoy huge profits, while promoting their contribution to energy transition.

In Burma, large-scale mining operations are devastating the tropical forests, considered to be the largest area in
mainland Southeast Asia. However, in its Nationally Determined Contribution, which it submitted to UNFCC, Burma’s military regime committed to increase its Protected Areas to cover 10% of the total national land. This is clearly a double talk. In the past decade, there has been an increase in the forest loss, as it heavily promotes mining throughout the country, and building of large dams for hydropower, which will irreversibly damage the ecology of the country. Military owned companies are earning billions of dollars from these large investments. These investments over the country’s natural resources are what are keeping the military regime cling desperately to power. Thus, it lashes out violently on communities, their leaders, and activists who stand firm in the defense of the forests, their rights to their lands, and their lives.

So this is what you get when governments would rather rely on corporations and forge partnerships with big businesses – climate false solutions. The United Nations should realize by now, that the solutions to this climate crisis that we are in, are not in the illegitimate military regime of Burma, or authoritarian governments who consider the communities as obstacles in their profit-sharing with the dirty large corporations.

The UN and the governments should look at indigenous women, rural and community based WHRDs and their
communities as critical partners, contributors to developing genuine and just solutions to the climate crisis. We are not the culprits, we are not the criminals. With us, and the grassroots movements, lie the solutions.
To quote Choosri Olakji, from the Southern Peasant Federation of Thailand (SPFT), “We practice being sustainable on our own. We make food and medicine. We give emphasis on the earth, water, nutrients and life cycle. We collect seeds and vegetables and share to community members for them to earn and learn forestry to make products necessary for daily living. We are promoting ecological sustainability and we demand states to provide care income for mothers and people of every gender, who care for people, for the urban and rural environment, and for the natural world.”

Let the rural and indigenous women and their communities lead the path towards a just transition. And even as our governments continue to fail us, we commit to keep resisting, and we pledge to work together across the borders not just to dismantle false climate solutions, and make the climate culprits accountable, but also to dismantle the very systems that create and exacerbate the climate crisis that we are in – patriarchy, neo-colonialism, militarism and corporate-led development.

Towards just, free and nurturing societies!